Happy to have 'From a Former Member of Bomber Command' an 'Four Weeks' appear in the inaugural issue of The Crank (link here).

Also, 'Characters' appears in the London Reader, touching on the communication divide between languages (and Whatsapp as flirter's charter). 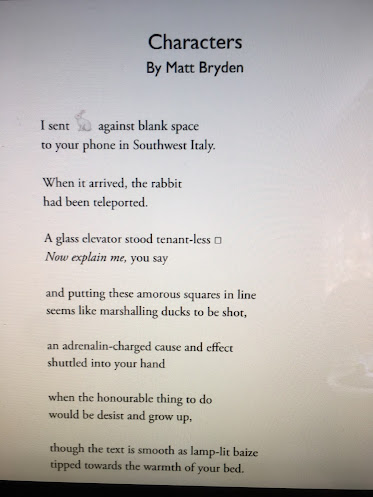 I've been enjoying a new experience of late, getting together with friends virtually to watch a film in synch. Rather than being a distraction, the experience has actually created an intense focus on the films we watch and is always followed by an exchange and catch-up which I carry with me into the week to come.

So far we've traced an international bent. My choice was The White Balloon, a stunning fairy tale-like film set on Iran's new year (which is celebrated at mid-day when sun and moon are in balance). It's a film in which a young girl wants to purchase a goldfish and tries to buy one, surviving the market of snake-charmers and shops in which she is all but invisible, being a girl. It's a wonderful film, and only my second Iranian film after Wadjda. 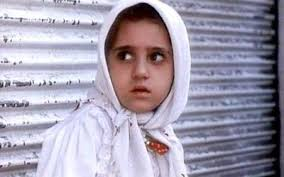 The second film we watched was Tampopo ('Dandelion', the name of a widow in search of the perfect ramen recipe), a Japanese foodie-western which again charmed us and had us laughing. I can't believe how warming I've found these films watched with friends from afar. 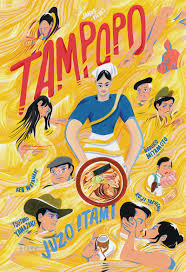 Many thanks to Kim Moore for featuring one of my poems from the Poetry Map - 'It's my contention' - as Sunday Poem on her blog.

The Poetry Map is up and running now, with free downloadable worksheets for teachers and students to use in class. I've written an article on the map for NAWE's Writing in Education magazine.

Check it out here: 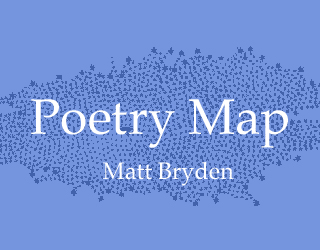 I've also got another post up at the Arvon Teachers as Writers site.

(In case you missed my first post for them, it's here).

I've  a review of this great anthology at Versopolis. 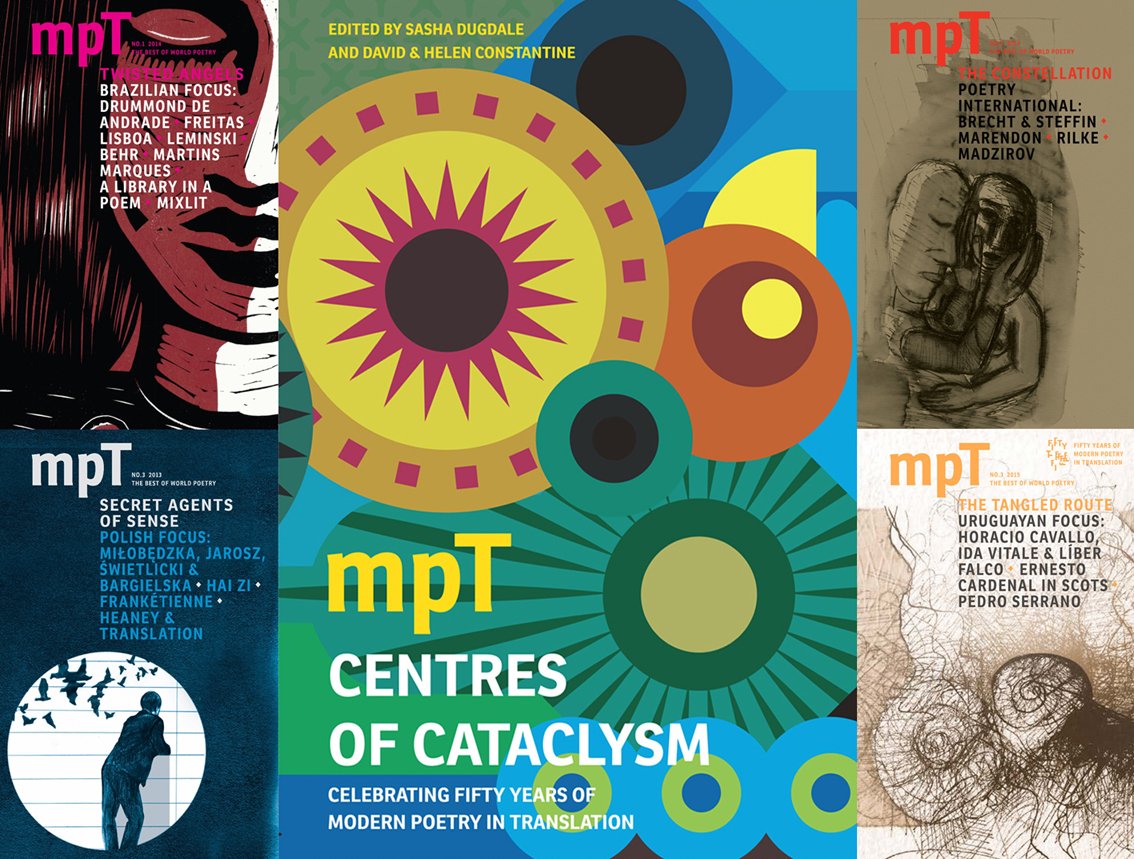 A Couple of New Poems, a Review, an Article

At Enchanting Verses, guest-edited by Harry Man, I've two poems 'After Daphnis and Chloe' and 'I Lost my Igloo', as well as an extended review of Christopher Logue's War Music complete.

Find them here and here.

I've also a consideration of allusion in art up here at Versopolis. 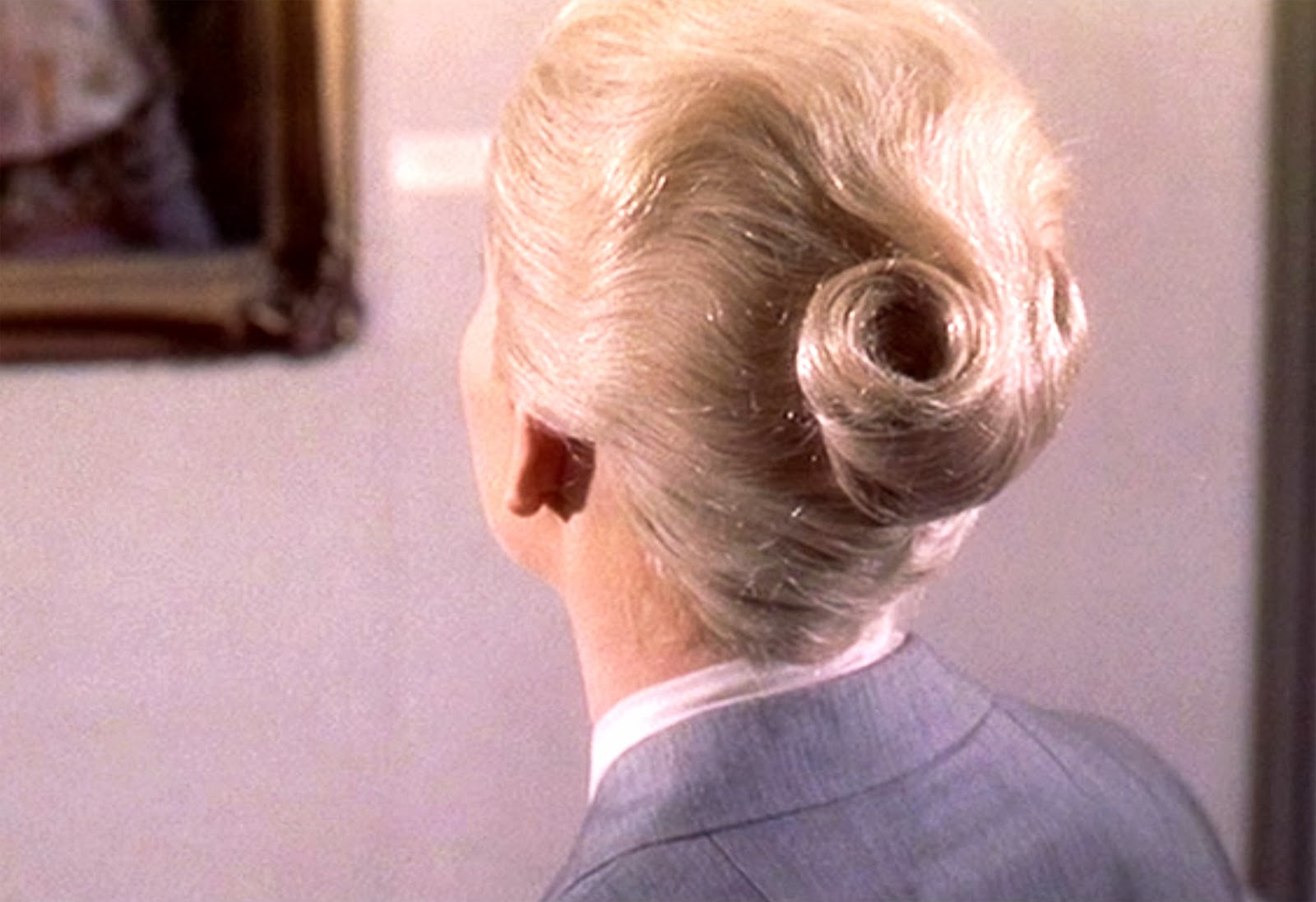 A few years ago, I began work on my Poetry Map, four sequences of poems set at the place they were written or set. Now, with the help of Jon Munson II, that has become a reality. 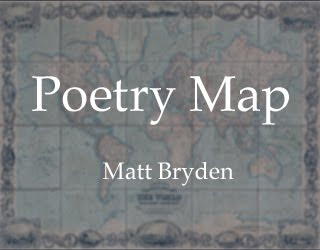 Happy to have a poem in Tiffany Tondut's Asterism anthology - poems inspired by punctuation. 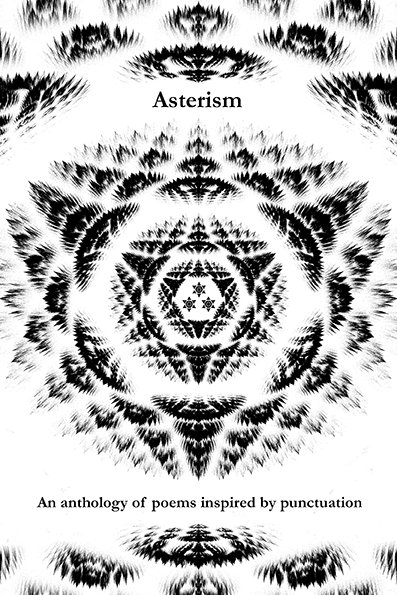 Mine is the square symbol you get when an emoticon in a text message comes back empty. Since it describes a missing character, it's a poem about what's lost and gained in textspeak. It's an interesting anthology featuring Harry Man (#), Abigail Parry and Hannah Lowe among others.

The second poem is 'Janus' from Tears in the Fence, a poem about the dangers of living two lives at once (not least, exhaustion!). Copies can be purchased here.

It's been a great six months - passing my driving test means I can now attend meetings of the Fire River Poets! I can't wait to get back in the swing of discussing and workshopping poems.

I've spent the last four weeks in Hawthornden Castle near Edinburgh, where I was a fellow with four other writers. We had snow, and I even managed to spot the deer twice. Ruth Shannon provided the cooking, Hamish Robinson ran an excellent table. 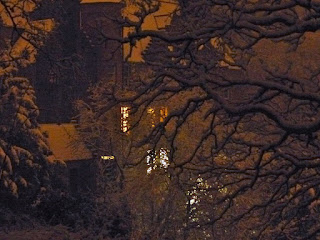 Thanks for the snap, Anke!

I left Somerset with several foot-deep piles of paper, and returned with five thin wallets.

Before that, I was in Greece for a couple of weeks, exploring some sites from the Iliad, and the Mani region. Again, I also enjoyed some great cooking, and swimming, with poet Margaret Eddershaw and Keith Sturgess, who so kindly put us up. 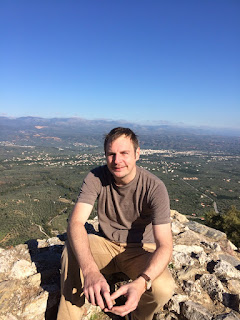 
Do check out No Landing, the blog of Harry Man and Jennifer Essex's exploration of
Hurst Castle. I was lucky enough to be stationed there a couple of days, and whipped up a couple of poems.

I've a couple of placings to mention:

‘Respite’ was shortlisted for the Live Canon competition, and appears in the 2015 Live Canon Anthology.


‘Putting Away the Birds’ was commended in the Torbay poetry competition.

Earlier in the year, ‘The Sitting’ was highly commended in the Gladstones Library Mystery Lady competition.

'After Peter Blake' appears in the beautifully produced Paris Lit Up, 'Classroom' in The North and my translation of 'A Grave Life' - by Ami - in Modern Poetry in Translation. ‘New Year’ appears in Live Canon's New Poems for Christmas.

I was also really pleased to have a poem in Other Countries - Contemporary Poets Rewiring History, edited by Claire Trevien and Gareth Prior, earlier in the year.

For those who can afford £47.99, I’ve 3 poems in the Teaching as a Human Experience anthology from Cambridge Scholars Publishing.

'PUTTING AWAY THE BIRDS describes just that, and does so with great precision and avoidance of the obvious. Listen for the brilliantly chosen verb ‘extinguish’ and that simile of the soap. This is a poet looking at something rarely seen and reproducing it in imagery and line-break.'

John Greening
Posted by Matt at 5:12 PM No comments:

Book Launch of Come to the Edge!

A lovely launch reading by children at Ilsham C of E and Ellacombe Academy on Thursday.
It was at Torquay library, and part of the Life Lines project, run by Story Door. 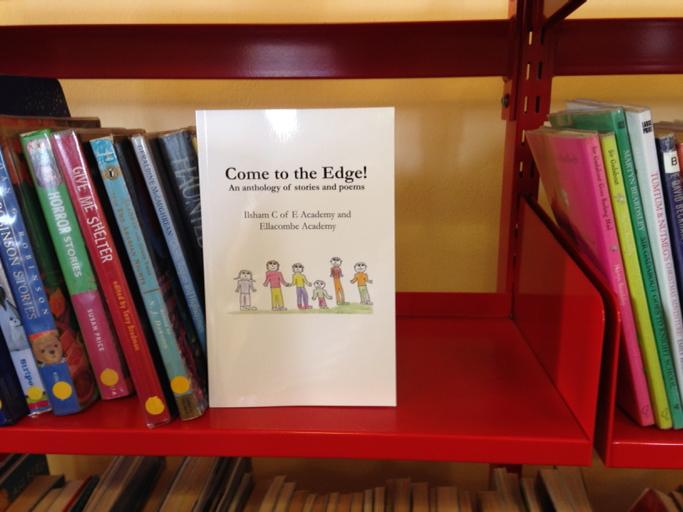 A terrific Easter break in Portugal with William Yeats, Frances Leviston and Emily Dickinson for company. The library in Rio Maior is named for Ruy Belo, the existentialist poet. I always forget to explore his work until I'm out there.

Birthday wishes from my brother in St Kilda, Australia.


And an excellent treatment of my poem 'Handicap' by Sofia Buonvino.

There's a lot to look forward to in the next few months. In June I'll be walking the Marazion to Coverack legs of the Cornish coastal path as part of Becki Nevin's Wonderlust project - more details here. It's reminiscent of Simon Armitage's Walking Home/Walking Away projects, which I was also lucky enough to take part in, though with a more communal bent and including a variety of different artists. You can help with the crowdfunding here.

My Story Door project in Exeter has wrapped up, with a book launch at Exeter children's library in March. We are nearing completion of the parallel book by students at Ellacombe Academy in Torquay, which promises to be terrific! Can't wait for the launch later this month! I'm also hoping to get another more poetry-themed project off the ground in the summer term.

A few publications - I've a review of Josh Ekroy's first collection in the new Interpreter's House while Tears in the Fence has a poem inspired by a character in Penelope Shuttle and Peter Redgroves' The Terrors of Dr Treviles.

I'm also glad to have a poem republished in Orange Coast Review by Davi Loren. I first placed a poem there back in the day. I only wish I could make the launch party.

20th January: a warm reception at Devizes school, where I taught the winners of the John Betjeman Poetry Competition for Young People for an afternoon. It was a terrific afternoon, at least from my point of view!

Since moving to Somerset I've been doing a lot of creative writing teaching, with adults in care homes as part of the Making of Me project with the Courtyard, for which I was mentored by John Killick; and for Story Door, a charity which raises literacy in schools through creative writing. So far, we've been to trips to Babbacombe Model Village and Exeter Cathedral, and written acrostics and collage poems. Students in both Ellacombe Academy in Torquay and Wynstream School in Exeter will be publishing (and illustrating) their own books in March, with a launch at the library attended by parents with the accompaniment of cake,

I've had a few poems out in recent journals: 'After Peter Blake' in the beautifully produced Paris Lit Up, 'Classroom' in The North and 'A Grave Life' - by Ami - in Modern Poetry in Translation. I was also really pleased to have a poem in Other Countries - Contemporary Poets Rewiring History, edited by Claire Trevien and Gareth Prior.

A couple of reviews of Boxing the Compass have appeared:


For the reader who revisits poems, and is able to join in their making, there are many pleasures here.
Jane Routh, Magma 60

Bryden displays a confidence which ensures that this first collection hits the target.
Louise Crossley, The Interpreter’s House 57

A review of Ami's The Desire to Sing after Sunset has appeared in Cha: An Asian Literary Journal.

Lastly, I'll be delivering papers at a couple of conferences this year:

New Generation to Next Genereation in March, where I'll be talking about Glyn Maxwell.

In September, there is the Dreams as Deep As England Ted Hughes conference in Sheffield, at which I'll be discussing Hughes's collaborations with his friend, the painter and potter R.J. Lloyd. The two of them created four collections: What is the Truth, The Cat and the Cuckoo, The Mermaid's Purse and Earth Dances. He kindly allowed me to interview him at his home in Bideford last January, where I was treated to pea and ham soup with a fantastic Italian sherry.